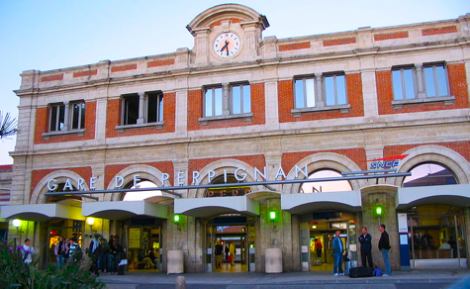 At the top of the list of attractions in Perpignan is Gare de Perpignan, Perpignan's railway station, made famous in 1963 by artist Salvador Dali's pronouncement that this was the center of the universe. He shared that he got his best ideas sitting in the station's waiting room. There is a monument atop the station in Dali's honor, and across the surface of the main platform, in big, bold letters, is painted, "PERPIGNAN CENTRE DU MONDE" – translated as "Perpignan Center of the World."

Next up, Le Castillet, an ancient builidng located at Place de la Victoire, is probably one of the city’s most identifiable landmarks. In fact, the city’s logo features a sketch of it. Built in the 1300s, it was converted to a prison a century later. Its rich red brick color and dramatic towers make it a sight even from the street, but it is well worth a visit inside, where a museum is housed today.

Another interesting stop is the Musée de l’Aviation on Route d’Elne, which features planes, aviation models and parts on display. Closed Sunday and Monday mornings.

Le Palais des Rois de Majorque, or the Palace of the Kings of Majorca, at Rue des Archers, was built in the 1200s for Count Jaume I. It is a stunning example of medieval Catalan architecture.

Musée des Médailles et des Monnaies Puig, 42 Avenue de Grande-Bretagne, has a vast collection of coins and medals, including examples of Gallic, feudal, royal and foreign coins. What is most intriguing is the museum’s collection of unique Catalan and Roussillan money.

L’Eglise Saint Jacques (rue de la Miranda, Perpignan) is worth a visit for its resplendent Catalan alterpieces. The church was built in two parts, first in the 14th century and later in the 18th century. Don’t miss the garden, La Miranda, behind the church on the remains of a medieval fortification. The church also plays host to a moving Good Friday procession akin to the famous one in Seville. During renovations in 2000, a profound archeological discovery was made on the site. A tremendous collection of medieval pottery was unearthed.

Get a true sense of the Catalan culture and history at the Musée Casa Pairal, Place de Verdun. This amazing collection is an homage to the Catalan culture, including exhibits on agricultural life, weaving, furniture, feasts and folk dance. On the first floor, there are two temporary showrooms. While you’re there, be sure to step out onto the terrace for a great view of the city, sea and mountains.

Head to the coast for more Catalan culture at the Museum Casa de les Alberes, Place des Castellans. This museum demonstrates many of the local crafts (making espadrilles or wine corks). There are several antique tools on display. The museum provides tours of old Argèles’ streets, ramparts and the church.

Château d’Ultréra and l’Ermitage de Notre-Dame-du- Château are among the most interesting attractions in this region, with the castle ruins dating back to the fifth century occupation by the Visigoths. The castle was destroyed in the 17th century, but remnants can be found. Today, a 17th century church stands there as well. To get to the ruins, follow signs from the city toward Sorède. At Sorède, turn left and take Rue de Campet. Take another left on Rue de Notre Dame d’Ultréra to Notre Dame d’Ultréra. Park and walk to the ruins.

Cap Cerbère is just south of the village of Cerbère, and provides one of the globe’s most memorable views. Gaze upon the coastline as France’s Côte Vermeille collides with Spain’s rugged Costa Brava.

In Prades, Saint Peter’s Church is one of the key attractions in town. Although most of the church was rebuilt in the 17th century, a belltower dating back to the 1100s remains.

Cap Cerbère just south of the village provides a spectacular view spanning the Côte Vermeille and Spain’s Costa Brava. The solar lighthouse there can be seen for 15 miles.