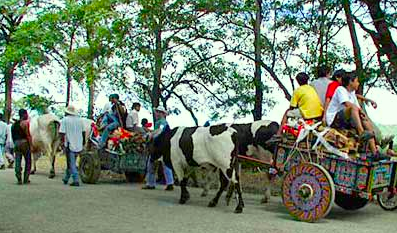 Bullock-cart travel on festival day in the Nicoya area of Costa Rica
Photo:

The cities of Santa Cruz and Nicoya, for Costa Ricans, are traditional farming and cattle ranching centers for the surrounding agricultural areas. But for tourists, these cities are central gateways to the beaches of western and southern Nicoya Peninsula, those lying to the south of Tamarindo. Typically, the beaches here lack the denser development of the northern coast and thus have an appeal all their own. They vary from black sand to grey to sandy white and, as in the northern Nicoya Peninsula, some are better for swimming, while others are known for surfing. Besides beaches, the city of Santa Cruz holds some tourist interest too, namely its pottery markets, while Nicoya is handy to the Barra Honda National Park.