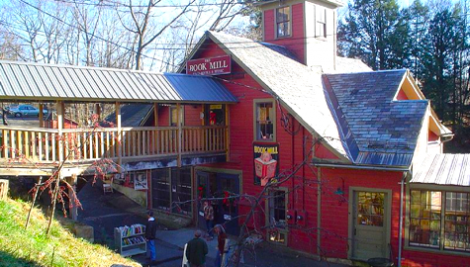 The Bookmill at Montague in the Pioneer Valley, Massachusetts (cc)
Photo: Michael Femia

The Connecticut River cuts south through Massachusetts on its way to the Atlantic, separating the western part of the state where the Berkshires rise. The river valley itself, Pioneer Valley, which is just a few miles wide at the north, is 20 miles wide near Springfield at the southern border of the state. The land around it is oddly flattened, considering how quickly the hills and peaks rise up from its edges – geological history suggests that it was swept into place about 10,000 years ago, when a massive northern lake, Lake Hitchcock, broke loose and raced to the sea.

The river’s wide mouth in southern Connecticut opened this land to settlement early in the Colonial period. But it was good farmland and good hunting land, and the Native Americans in the region did not let it go easily. For much of the 1600s the territory was embattled. So instead of being known as the Connecticut River Valley, this area was named for its significance in the changes taking place: the Pioneer Valley.

Although there is little that could be called wilderness in the Pioneer Valley today, hikers have nearly a dozen state forests and parks to explore, and climbing Mt. Tom and Mt. Holyoke offers views over the region. Cyclists have adopted the slow riverside roads, despite the shadow of nearby interstate travel. On the river itself, boats are increasing, and so is ecotravel, now that migrating fish like the shad and Atlantic salmon are returning and the bald eagle population is being restored. In response to the fresh interest in the environment, the Silvio O. Conte National Fish and Wildlife Refuge is being created, starting with an extensive survey of the wildlife and terrain of the entire Connecticut River Watershed. The refuge headquarters is in the town of Turners Falls, where the river makes an abrupt east-west turn before its long run south.

Pioneer Valley is divided into three counties; from north to south, Franklin, Hampshire, and Hampden. Today the counties are sharply different from each other. Franklin remains a quiet rural area, full of farms and small villages with a handful of larger towns that grew up around the mills the river could drive. Here are the towns of Northfield and Mt. Hermon, Turners Falls and Montague, Greenfield and Deerfield. See how even the town names focus largely on the land? Then the Five College Area around Northampton and Amherst – home to Smith, Amherst, Hampshire, and Mt. Holyoke colleges and the University of Massachusetts at Amherst – brings the playfulness and inquisitiveness of campus life into the valley; shops multiply, and eateries abound. Finally, as the river and the highways approach Springfield, a major industrial city, the countryside erupts into densely populated cities.

Along the western side of the Pioneer Valley the landscape hesitates between the river-valley bustle to the east and the slopes of the Berkshires to the west. Caught in this pocket are two very special regions: the very scenic “Mohawk Trail” stretch of Route 2 to the west of Greenfield, and the Hilltowns, to the west of Northampton. Each has its own description here.

A brief note about getting around in the Pioneer Valley: Interstate 91 runs north-south through the valley, and most directions are given from here. Route 5 is the quieter “old road” that runs parallel to the interstate. The major east-west routes are, in the north, Route 2; then Route 116 and Route 9; getting closer to Springfield, Route 202; and right up against the city of Springfield, the Massachusetts Turnpike, which is Interstate 90.