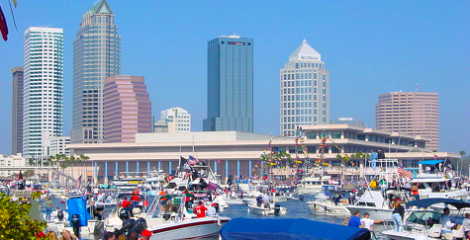 Tampa is a big city – skyscrapers, industry, traffic jams, the whole bit. Known as “The Big Guava,” the city alone has a population of 303,000 plus. Many of its guests come on business. Tourists and adventurers are more likely to head to the islands of St. Petersburg and Clearwater.

Still, Tampa has its vacation appeal, especially for the cultural traveler, and has since the 1880s, when Henry Plant brought his railroad to town and built an elaborate hotel designed after the Alhambra in Spain. With its deep port and easy water accesses, Tampa thrived. Cigars constituted one of its earliest big money-making industries and built an entire city named for industry magnate Don Vicente Martinez Ybor. Today, upwardly evolving Ybor City retains the essence of the Cuban cigar-makers and their immigrant workforce and is the city’s best cultural attraction. Teddy Roosevelt added to Ybor City’s historic allure. Stationed with his Rough Riders in the vicinity during the Spanish-American War, he frequented a local club.

Busch Gardens is Tampa’s major attraction. It, along with the new Florida Aquarium, a number of museums, professional sports, and parks, gives Tampa a lot to offer the sightseer. Outdoor enthusiasts fare less well, but they will find a lot of indoor activities or attractions that deal with nature. In the great wide open,Tampa Bay (the largest harbor in the US between Norfolk and New Orleans), Hillsborough Bay, and the Hillsborough River, which wends its way from civilization to sheer wilderness, generate some recreational excitement. Most adventure is sought on the water and away from city lights.